Born in Matehuala San Luis Potosi, Mexico, Maria Ruiz migrated along with her family to the United States in the spring of 1989 in search of a better life. Maria worked in a range of jobs, she started as a laborer picking fruit and move on to work in nurseries, restaurant, fiberglass factories, and landing the job at El Expresso Bus Company where she had the opportunity to meet a sales representative from Mega Communications that asked her to audition for a part-time position as Dj for their new station. And so in 1999 began a career filled with experiences that she never thought possible. She learned technical aspects of the live transmissions as the technician that was in charge of connecting and monitoring live remote-controlled broadcast. She hosted the morning show’s “Chile, Tomate, y Cebolla El Show,” “Los Hijos de la Mañana,” and had the honor of being the co-host and technical director of the nationally syndicated morning show “El Cucuy de la Mañana” in which she participated in a missionary trip to the country of El Salvador as part of the show staff. Maria has served as host of the afternoon drive time with mix shows and a specialty show named “Conecciones,” in which listeners called in searching of that special someone. Hosting festivals with crowds of thousands, Maria flourished as a mistress of ceremonies for the radio station she represented. Maria participates yearly in the “Great American Teach-In,” sharing her story with young migrant students and demonstrating that they too can live their dreams. In November of 2007, Maria joined “La Nueva 92.5 fm, as the newest addition to the morning team of “El Traketeo,” starting the listeners day with information and news with a humorous and lively team of air-personalities. Totaling 14 years of broadcasting experience, Maria says it’s been a wonderful trip filled with experiences that have made Maria Ruiz a confident and experienced air-personality.

Her ambitions took her in the direction of the big screen. Maria produced and hosted one of Tampa’s longest running Hispanic local TV shows, Cheka El Dato TV. In where she brought her audience the news stories that were missing in the every day entertainment news shows. She managed a team of producers, hosts, and engineers that worked together to bring the one hour tv show to the Estrella TV Tampa network every Saturday morning for 3 years. The show was recognized by the organization Mi Familia Vota for their work on pushing the Latino Vote in Central Florida.

Since 2012, Maria delivers a weekly calendar of events to households in over 12 counties in FL via her upbeat TV segment “Chekalo” on Estrella TV Network Tampa.

And now Maria Ruiz is proud to bring the Latino market a new and refreshing way to hear the entertainment news, NotiChica! NotiChica is a radio segment that is syndicated to stations throughout the state of Florida, it is one minute of interesting facts that keeps people glued and wanting more. NotiChica has its face on www.NotiChica.com where all the social networks meet and share with Noti Chica’s audience.

If you ask her how she did it, she will reply that she has been at the right place and at the right time and has taken advantage of the opportunities she has been given. Maria strives to be the best she can be and brings to the table a positive energy and a strong will to work. Maria Ruiz is proud to represent La Mujer Latina (The Latin Women) making her a role model to all the women who strive to reach the next level in their lives, “never settle,” says Maria. 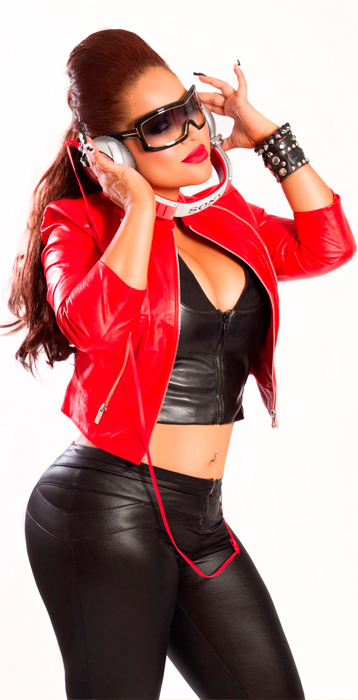